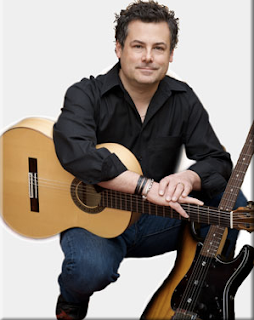 Fiery Rumba Flamenco Latin Jazz Guitar.  That’s how John Gilliat’s music has been described.  We say it’s comforting and toe-tapping, relaxing and dance-worthy, powerful and fun, unique and passionate.  John’s music is appropriate for everything from weddings to working out; relaxing in a bath to dancing the night away!

John is a Canadian-born musician who started playing guitar at only 9 years old.  He’s now toured the world, won several prestigious awards and has quite the reputation for being an amazing guitar player!  His music has been used in TV shows, The Weather Channel, documentaries, commercials, and more!
Take a listen for yourself with this free download of the song, “Christopher” below!  We’re sure you’ll find your body moving to the beat!

* Beyond Boundaries
John has released his latest CD in Japan and Canada titled “Beyond Boundaries”. The new CD continues to offer new direction and contemporary expression to Nouveau Flamenco, Flamenco Rumba and Jazz. Included in Beyond Boundaries is a very special composition titled “Onishi”, created from the beautiful images, sounds and excitement John experienced during his performances at Fujiyama Koen Park in Onishi, Japan.
* Peace
In 2002 John released his second CD called “Peace”. Picking right up where Freedom left off, Peace forges further still down the path John has carved out for his music. Passionate and fiery flamenco guitars and beautiful Latin Jazz, Pop style melodies intertwine with exotic Latin percussion, bass and drums. The 2002 West Coast Music Awards nominated Peace as “Best Instrumental Release – Non Classical”.
* Freedom
In May of 1999 John released his own independent instrumental CD titled “Freedom”. A showcase for his considerable guitar talents, Freedom embraced world beat musical elements of Rumba Flamenco, Pop and Latin Jazz. Above all, Freedom was recorded with the hope to share the peace, joy and excitement John feels when performing for audiences around the globe.
* Winter Strings
A wonderful Christmas collection of traditional and original holiday songs.  This album is only acoustic guitar!
* Christmas
In 2003 John released his 3rd CD titled Christmas, A wonderful collection of holiday classics played on flamenco guitars, accompanied by bass and percussion.

If you’re a guitar player or reality show watcher, you’ll love John’s fun Youtube show, “Guitar Slinger,” which follows him on his busy touring schedule!  You’ll see what it’s REALLY like to be a musician!  You can also watch John in action in some great videos!
Head over to John’s Youtube Page!

This Giveaway is open to U.S. and Canadian residents, ages 18+.

Disclaimer: The participating bloggers were not compensated for this post.  No purchase is necessary to enter. Void where prohibited by law. The odds of winning are based on the number of entries received Open to US and Canadian residents 18+ only. Confirmed Winner(s) (by Random.org) will be contacted by email. Winner(s) have 24 hours to respond before a new winner is chosen. The sponsor will be responsible for product shipment to winner(s) of this giveaway. My blog is not responsible for product shipment/delivery. This event is in no way administered, sponsored, or endorsed by, or associated with, Facebook and/or Twitter, Google, Pinterest. This disclosure is done in accordance with the Federal Trade Commission 10 CFR, Part 255 Guides Concerning the Use of Endorsements and Testimonials in Advertising.