END_OF_DOCUMENT_TOKEN_TO_BE_REPLACED

If you have never used Goat Milk products you are missing out! This is an awesome giveaway, and I’m exited to be participating!
Sponsor: Goat Milk Stuff
Hosts: Down South Savings My Journey to Living Well
Adventures of a Midlife Mommy
Very Special Thanks to all of the bloggers helping to promote this giveaway!
Dates: October 2nd – October 11th
Open to US Residents Only
18+ Void Where Prohibited
Welcome to the Goat Milk Stuff Giveaway! There will be 2 winners! Each winner will recieve a $25 Gift Certificate to Goat Milk Stuff. Me, I love this “Stuff”!
Here is a little history about the company:

For Starters Goat Milk Stuff is a family run business. The Jonas family is a large family of 10 from Rural Indiana. They have a small herd of Alpine Goats and they work together as a family in conducting their business. All of their children are home schooled and have their own unique rolls in the family business. All of their goats are show quality and are checked annually. The Jonas’ Goats are not fed any antibiotics or growth hormones, so there is nothing unnatural passed into their milk.


You Can Read My Full Review HERE 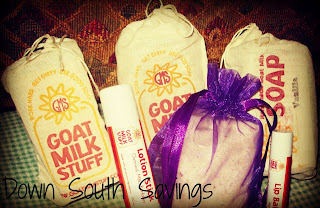 The Goat Milk Stuff Family has generously agreed to give 2 Readers a $25 Gift Certificate to try their products! Please enter on the Rafflecopter below. The more entries you get, the better your chances of winning! All entries are verified so please be honest. Good Luck to each and every one of you!
a Rafflecopter giveaway

Disclaimer: Down South Savings nor any of the participating blogs/bloggers, including Pea of Sweetness, are responsible for sponsor prize fulfillment. All opinions are that of my own and my differ from those of your own. At the end of the giveaway winners will be emailed and announced on the Rafflecopter. You will have 48 hours to claim your prize or another winner will be chosen so please check your spam folders! The host will then forward your name and email address to the sponsor “Goat Milk Stuff” for prize fulfillment.

How fun is THIS giveaway? Corset Chick has great prices, too!

Corsets have a long history in women’s fashion. The first recorded corset was from 2000 BC in Crete. They continued to be a main article of clothing in the 1600’s as an undergarment. After that, they emerged as an outer garment in the 1700’s. Then, back they went under the clothing in the 1800’s. The point is that this is the only era that doesn’t seem to use it as a main article of clothing. Well, I say it’s time to take them back! They’re great!

Corset Chick gave me the option of choosing a corset priced under $30. I chose the Navy Blue Halter Corset. I know it’s not your traditional lingerie type corset. I like those too. But, I wanted to pick something that could be a little more versatile. I thought it might look cute with a pair of jeans for a night out on the town.

But, I also thought it would go well as part of a costume for Halloween. Since the halter has a 1940’s flair to it, I immediately thought of Dorothy from the Wizard of Oz. I know it’s not the traditional Judy Garland Dorothy. But, I like to think out of the box.
Most importantly, I love how the corset sucks in my stomach. (Having three babies has been a bodily sacrifice.) It also improves my posture. Overall, I like how I look in it.
All of their corsets have boning structured in them, which is what makes the corset strong to pull in your body like an hour glass. Each corset has laces in the back for adjustable fitting. Corset Chick carries regular and plus sizes all the way to 6XL.

The event dates: 9/24-10/8
This event would not become possible without the participation of these amazing co-hosts: Giveaway Gator , Couponing with Integrity, and Pea of Sweetness.

a Rafflecopter giveaway
This giveaway is open to entrant 18 years of age or older, except where prohibited by law. US residents only. No purchase is necessary to enter. The odds of winning are based on the number of entries received. To qualify to win, you must complete, at minimum, one entry on the Rafflecopter form. The winner will be randomly chosen by Rafflecopter. Winners will be notified by email from Mommy Lesson Plans. Winners will have 72 hours to respond or risk forfeiting their prize. Prize may re-awarded solely by the Sponsor’s discretion. Prize fulfillment is the sole responsibility of the sponsor. Pea of Sweetness may not be held liable for Sponsors who do not fulfill prize shipments. Mommy Lesson Plans was not compensated for this post. I reserve the right to publicly publish winners’ names. By entering this giveaway, you are agreeing to these terms and conditions.

Welcome to The Awesome Have It Your Way BlogGY Giveaway!

This wonderful event is brought to you by,

Jenn’s Blah Blah Blog, Dishin’ With Rebelle, and Contest 4 That,who will proudly be launching Pink Ninja Media in the next few weeks.

Have it your way is exactly what it means – YOU CHOOSE! Maybe you’ve been eying the new Kindle Fire, maybe you’re wanting to spoil someone for Christmas. Whatever it is – you choose anything you want valued up to $200! This is such a fantastic opportunity!!

Disclaimer: Pea of Sweetness is not responsible for shipment of prize. Jenn’s Blah Blah Blog will be responsible for shipping prize to winner. I did not accept any form of payment to help promote this giveaway. My opinions are my own and may differ from yours.